Chicago: A City Coping With Crime 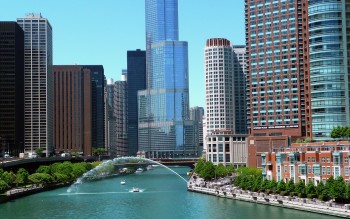 A Popular Location to Visit

Tourism is key in “The Windy City.” Last year, tourism accounted for more than 145,000 of all jobs and brought in $15 billion to the economy. In 2016, there were over 54 million visitors who travelled to Chicago. Compared to the year before in 2015, there was a 2.9 percent increase in travel. These overall numbers included people both on business and on vacation.

The two main reasons for the increased number of visitors are due to the various large-scale city events and attractions. Famous landmarks draw in an impressive number of people, locations such as: Wrigley Field (home of the Cubs), Millennium Park, Cloud Gate, Skydeck, Field Museum, The Magnificent Mile and others. These places are iconic—people want to be a part of something they have always heard so much about and finally have the opportunity to experience first-hand.

And while tourism growth has reached record numbers, Henry Hartevelt, the President of the Travel Industry Consistency Atmosphere Research Group stated, “The city will need to curb some of the violence continually making headlines to maintain that momentum.” He continued, “It may take a toll on leisure travelers who have complete discretion on where they choose to go.”

So despite Chicago’s popularity, the city will have to tackle its alarming crime rate if it wants to maintain its place as one of the leading travel locations to visit in the U.S. People want to feel safe and secure anywhere they venture—not just visitors but the residents of Chicago as well. One of the best ways to prevent crime is to come together as a community.

Despite its current issues with crime, Chicago is an appealing city for many people to live in. It is more than a place that continues to have issues with crime— stemming from its infamous Al Capone mafia days in the 1920s during the Prohibition era. Then, there was literally terror openly on the streets. Fast forward to today, Chicago is also more than a city that is renowned for simpler things, such as its deep-dish pizza.

Chicago is a sprawling metropolis with an abundant culture of diverse food, music and art. There is no place quite like it. As the third largest city in the U.S.—ranks just behind New York City (8.5 million) and Los Angeles (3.9 million), Chicago is home to an estimated 2.7 million people. The median age of its residence is 32 and mainly comprises of people of Caucasian, African American and Latino decent. The number of occupied homes is 1,045,560 and consists of mainly family-led households.

Only 15 percent of Chicago homeowners are viewed as being equity rich, meaning they have over a 50 percent steak in their homes. On the contrast, over 17 percent owe 25 percent or more than their current market home value. Regarding equity wealth, areas throughout the Northwest side are doing the best, including these neighborhoods: Old Irving Park, Mayfair and Jefferson Park, Logan Square and Avondale. These areas and numbers only reflect homeowners and don’t take into account the financial statuses of renters throughout the city.

One thing is clear: neighborhood wealth directly impacts the levels of crime a specific area will experience.

Migration to the City

One alarming thing to note is that Chicago’s population numbers are seeing the greatest population losses of any other major U.S. metropolitan city. The U.S. Census Bureau released this data in March of 2015. The report shows that the metro area decreased by 6,300 in a one-year span (July 2014-July 2015). This is part of Chicago’s total loss of over 80,000 people. Within the U.S., Chicago is losing its people to other locations (domestic out-migration) more quickly than it is having people migrate to the city.

Other large cities, such as New York City and Los Angeles see large domestic out-migration as well, but also see migrations to the city, offsetting any losses. After Chicago, the second worst city to see a net population loss was Detroit, which has had a floundering economy.

It goes to say that Chicago is at a crossroads if it’s not careful with things that can negatively impact its population. Crime is undoubtedly one such component that will potentially make people want to pack up and leave.

As stated before, Chicago has a complex relationship with crime—stemming from over a century ago. Al Capone set the stage for the mafia presence in the area, but it wasn’t the last stint of corruption it would see. Plenty goes on today in various forms. From theft, burglaries, violent crimes and assault, murder and rape, Chicago is a city that has it all.

To put it into perspective: halfway through 2017, violence in Chicago had claimed the lives of 323 people. From an annual perspective, 2017 is likely to see over 700 homicides—more than what it has been in 20 years. Even in comparison to the more populous cities of New York and Los Angeles, Chicago has a higher murder rate.

Much of Chicago’s violence surrounds its gangs, which have a hand in everything from petty crimes to drug dealing. Other factors include unemployment, racial divide and hardships of the South and Western parts of the city. And while there are police to help prevent citywide crime, Chicago as a whole now faces a strong resentment of its police force due to recent cases of racially-related police shootings of citizens.

How Can You Protect Your Home and Family?

Where your home security and personal safety are concerned, there are things you can do to ensure that you are better protected from things such as burglaries and violent home invasions. Every year, approximately 2 million homes experience a home invasion; however, with a home security system, your home will be 3 times less likely to be targeted. Home security systems provide a peace of mind, allowing you to worry less and focus more on the things that matter most to you, such as your family and daily activities. Enjoy all that Chicago has to offer—after all, it’s a city with plenty of great things to offer.